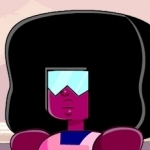 Garnet is the fusion of Ruby and Sapphire and the current de-facto leader of the Crystal Gems. Garnet is one of the last surviving Gems on Earth who joined the Crystal Gems in the rebellion against the Gem Homeworld, and afterwards assisted her friends in protecting the Earth over the next few mille Here you can play Crystal Gem Garnet Dress Up game and observe its walkthrough at no cost in friv1000.com. Crystal Gem Garnet Dress Up is an wonderful game from our list of Friv 1000 games.

Use Left Mouse button to Play